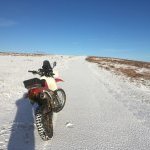 You meet the nicest people on a Honda

By Sir Fallsalot, May 31 in RIDE REPORTS