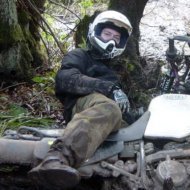 It's not the end of the world.....But you can see it from there!

By yen_powell, January 3 in RIDE REPORTS