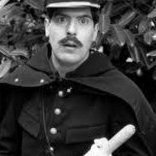 By Pedro, May 9 in RIDE REPORTS