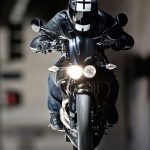 Getting A Taste Of The New Alpinestars Supertech R Boot